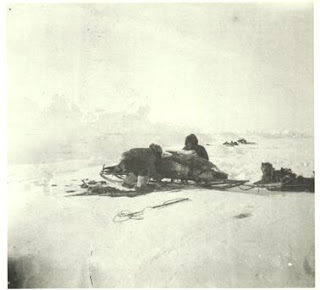 A sledge loaded with seal. [1]
Amundsen's plan was to have their base ready by the end of April, well before the beginning of the Antarctic winter in June, and to make three depot journeys to lay in supplies to 83° in preparation for the run to the Pole in the spring.

In addition to transporting the stores from the ship, seals and penguins were slaughtered and flensed, to be laid in for the winter as food for men and dogs. Unfamiliar with predators on land, the seals and penguins were easy marks. "We live in a veritable Never-Never Land," Amundsen wrote. "Seals come up to the ship and penguins to the tent, and allow themselves to be shot." [2]