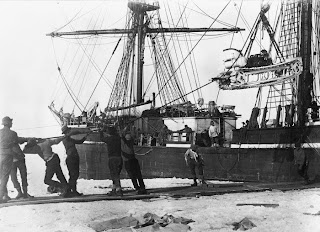 "Men pulling a motor-sledge from the 'Terra Nova' on 8 January 1911. Taken by Herbert George Ponting in 1911, during the British Antarctic ('Terra Nova') Expedition (1910-1913)." [1]
The third of the motor sledges was lost when it fell through the thawing sea ice as it was being unloaded. "We realised that the ice was getting very rotten," Priestley wrote in his diary, but no-one wanted to disobey Scott's orders to hurry. The sledge had been lowered onto the ice when Williamson went through to his knees, "[the] car suddenly dipped, the ice gave way beneath her after end and she fell with all her weight vertically on the rope. The rope began cutting through the thin ice, and we were never able to hold her steady for a moment. Man after man was forced to leave the rope through his hands, and when only five of us were left she took charge at a gallop and is now resting on the bottom at a depth of 120 fathoms." Priestley himself, having gone back to the ship for a life-line and Day's goggles, fell through and was swept under by a strong current, bursting up again through the rotten ice "like a cork out of a champagne bottle." [2] "Day, here are your goggles," he said calmly. [3]