In Scott's initial plans, a group of scientists would remain at Cape Evans, while two other groups, an Eastern Party under Campbell, would explore the coastline of King Edward VII Land, and a Western Geological Party under Taylor, would work in the mountains. The Southern Party would be made of up a select group of those at Cape Evans.

Oates had marked down two of the better ponies for Campbell's use, but upon watching them in action during the unloading of the ship, Scott decided that the slower ones in the polar contingent would hinder the faster ones. "After Service," Scott noted in his diary, "I told Campbell that I should have to cancel his two ponies and give him two others. He took it like the gentleman he is, thoroughly appreciating the reason." [1] 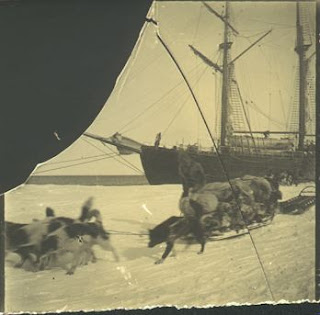 Transporting equipment and supplies to Framheim. [2]
"[All] dogs were landed," wrote Amundsen in his diary. "At the same time we drove up all supplies and equipment we dared load on the sledges the first time.... We have had a lot of trouble with driving today. There have been hidings for the dogs, but it has been necessary to make them understand the gravity of the situation. Things will soon be better." [3]

Each sledge moved five or six loads a day, about two tons in all.

They established their first camp on the Barrier "as a temporary residence for the dogs. It lay 1.2 nautical miles from the ship. Here ... in a pleasant little valley, we pitched a 16-man tent for the dog minders J[ohansen] & H[assel], together with passing travellers. Round the tent we then ran a wire in the form of a triangle -- each side 50 m. -- where our animals will be placed. We then continued our march to the place we had selected for our house. It lay only 2.2 nautical miles from the ship. In this way, our landing will be much quicker than originally planned." [4]

Amundsen had intended to build the hut ten miles inland, in case the Barrier calved, but upon getting a look at the terrain, he decided that the much shorter distance was sufficient. "At the appointed place, we marked out the building plot -- in a SE-NW direction, and pitched [another] 16-man tent for the use of Bj[aaland] & Jørg. [Stubberud], who will be the builders."

"On our return journey, we marked the whole route with dark blue pennants," Amundsen added, "so that it will be impossible to lose one's way. These marks have been placed at intervals of 15 paces. We were on board again at 5 p.m. -- Took some photos of this first trip of ours."