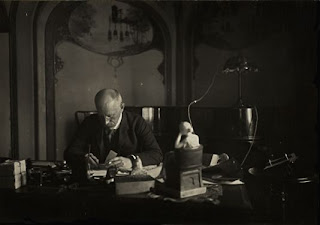 Amundsen wrote to Nansen that he was suspending preparations for the Arctic drift. "You, Herr Professor, will be the first to understand my action. To go into the polar basin for a drift of years, one must have all one's papers in order. There is no point in starting that journey with broken promises." [2]

Nansen replied, "[All] those lectures over there in that nerve-wracking land have drained your strength, and ... knocked you off balance.... This is the only way I can explain ... your letter, which otherwise would be incomprehensible to me, unless you have tired of the whole expedition with Fram, and would prefer to give it up; but then you would presumably say it straight out.... If it is your intention to threaten not to continue with Fram unless all promises are fulfilled ... it will put you in a most unfavourable light, as one who would break his great promise, in comparison of which all the other things that you mention are insignificant. When you told us that you were going to the South Pole before you started on the drift in the ice, you said it was to get the means for that expedition. With this as the point of departure, the Government and we others have defended you and broken lances for you, and, dare I say it, for your honour....

"You can perhaps reproach me for not doing enough to get these promises that you mention, carried out. But in the first place I have not known about them before your letter.... I do not feel that you have anything to reproach me with. I have really done my best for you and your expedition; I can sya what you perhaps have not understood, that I have made a greater sacrifice for you than for any other living person, in that I gave up my expedition to the South Pole, the crown of my work as a polar explorer, and renounced Fram so that you could carry out your drift over the Polar Sea. You might think that was not much; but you might consider that it was a plan that I had already considered before sailing on Fram, and which I had planned in all its detail in the hut on Franz Josef Land....

"So you went, and I saw Fram for the last time, and I got your announcement that you had gone to carry out the expedition I had given up for your sake. It was so strange -- but I was glad. It would in any case be a Norwegian, and precisely in the way I had thought. What I most regretted was however that you did not say anything to me beforehand; for I could at any rate have given you valuable advice.... I had thought it all out ... but all's well that ends well.... I repeat all this here so that you can see that I for my part at any rate have sacrificed something for you and your expedition, and that your bitterness against Norway because you consider that promises are so cheap here at home, and not entirely justified.... [It] seems to me that higher values are involved here than Lt. Nilsen gets a decoration and is promoted to commander ... or if Consul Gade gets an order etc." [3]

Amundsen replied bitterly,"I am grateful that you made me see that in ... dark moments one can forget the big things for bagatelles.

"But, Herr Professor, do you not also believe that details must be thoroughly looked after and not neglected? It seems to me that many great enterprises have failed because bagatelles have been neglected....

"It is possible I needed the correction you gave me. I would have resisted anyone else from whom I had received such blows. But I owe you so much -- I see now more than I ever knew -- that I calmly bow my head and accept it." [4]

Amundsen could not bring himself to write a letter of condolence to the RGS, and got Leon to do it for him. "Scott," Leon wrote, "has shown us how to die." [1]

Helmer Hanssen, though, wrote some years later, "What shall one say of Scott and his companions who were their own sledge dogs?... I don't think anyone will ever copy him." [2]

The Terra Nova put in at Lyttelton, to find flags at half-mast.

Amundsen was on a lecture tour in Madison, Wisconsin when he heard the news. "In a spirit of absolute dejection," wrote the New York Times, "travel-stained and woebegone, [the] discoverer of the south pole paced his apartment at the Blackstone Hotel this afternoon, and with an intensity of emotion, which he unsuccessfully endeavored to conceal, paid tribute to Capt. Scott and his brave associates who perished with him in the Antarctic.

"'Horrible, horrible!' exclaimed Capt. Amundsen, as he walked back and forth .... 'I cannot read that last message of Scott's without emotion. I never met him, personally, but I know he was a brave man. That is the way he died, like a brave man.'

"'And to think,' added the Captain in a hushed tone, 'that while those brave men were dying out there in the waste of ice, I was lecturing in warmth and comfort in Australia.'"

Asked about his Arctic ambitions, he replied, guarded as ever, "'I do not seek the pole. I may not even reach it. I do not care whether I do. These stories that I am actually to seek the pole are untrue. I am going up into that vicinity only on a scientific expedition, chiefly to study air and ocean currents. If I am close to the pole and conditions are favorable I will go there, not otherwise.'" [2] 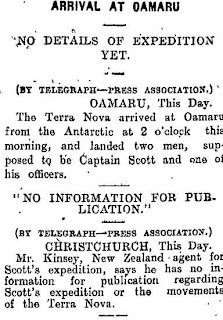 The Terra Nova arrived at Oamaru, New Zealand. Because of press contracts, she had to remain at sea for 24 hours after a cable had been sent to England.

"And so at 2.30 a.m. on February 10," Cherry wrote later, "we crept like a phantom ship into the little harbour of Oamaru on the east coast of New Zealand. With what mixed feelings we smelt the old familiar woods and grassy slopes, and saw the shadowy outlines of human homes. With untiring persistence the little lighthouse blinked out the message, 'What ship's that?' 'What ship's that?' They were obviously puzzled and disturbed at getting no answer. A boat was lowered and Pennell and Atkinson were rowed ashore and landed. The seamen had strict orders to answer no questions. After a little the boat returned, and Crean announced: "We was chased, sorr, but they got nothing out of us." [2] 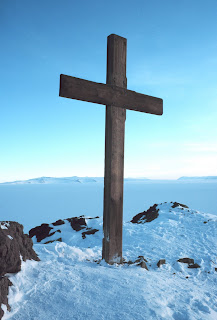 "After 28 hours' loading," wrote Cherry on board the Terra Nova, "we left the old hut for good and all at 4 p.m. this afternoon. It has been a bit of a rush and little sleep last night. It is quite wonderful now to be travelling a day's journey in an hour: we went to Cape Royds in about that time and took off geological and zoological specimens. I should like to sit up and sketch all these views, which would have meant long travelling without the ship, but I feel very tired. The mail is almost too good for words. Now, with the latest waltz on the gramophone, beer for dinner and apples and fresh vegetables to eat, life is more bearable than it has been for many a long weary week and month. I leave Cape Evans with no regret: I never want to see the place again. The pleasant memories are all swallowed up in the bad ones.

"Before the ship arrived it was decided among us to urge the erection of a cross on Observation Hill to the memory of the Polar Party. On the arrival of the ship the carpenter immediately set to work to make a great cross of jarrah wood. There was some discussion as to the inscription, it being urged that there should be some quotation from the Bible because 'the women think a lot of these things.' But I was glad to see the concluding line of Tennyson's 'Ulysses' adopted: 'To strive, to seek, to find, and not to yield.'

"The open water stretched about a mile and a half south of Tent Island, and here we left the ship to sledge the cross to Hut Point at 8 a.m. on January 20. The party consisted of Atkinson, Wright, Lashly, Crean, Debenham, Keohane and Davies, the ship's carpenter and myself." [2]

[1] Wikimedia Commons.
[2] Apsley Cherry-Garrard, The Worst Journey in the World, ch.19.
No comments:

A panorama of the interior of the hut at Cape Evans, January 2000. It remains much as it was when abandoned in January 1913. Photo by Kuno Lechner. [1]
"January 19," Cherry wrote in his diary. "On board the Terra Nova. After 28 hours' loading we left the old hut for good and all at 4 p.m. this afternoon. It has been a bit of a rush and little sleep last night. It is quite wonderful now to be travelling a day's journey in an hour: we went to Cape Royds in about that time and took off geological and zoological specimens. I should like to sit up and sketch all these views, which would have meant long travelling without the ship, but I feel very tired. The mail is almost too good for words. Now, with the latest waltz on the gramophone, beer for dinner and apples and fresh vegetables to eat, life is more bearable than it has been for many a long weary week and month. I leave Cape Evans with no regret: I never want to see the place again. The pleasant memories are all swallowed up in the bad ones." [2]

The ship, scrubbed and squared in preparation for celebration, and under now-Commander Evans, approached Cape Evans. "'Are you all well,' through a megaphone from the bridge. 'The Polar Party died on their return from the Pole: we have their records.' A pause and then a boat." [2]

Johansen, his alcoholism exacerbated by the disappointments of the Antarctic journey, committed suicide in a Christiania park. He left a wife, from whom he had been estranged for some years, and four children.