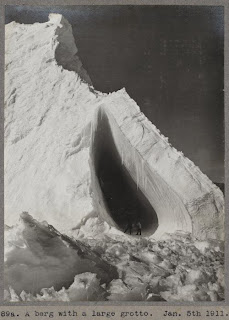 "An iceberg and grotto. Photograph taken by Herbert George Ponting on 5 January 1911, during the British Antarctic ('Terra Nova') Expedition (1910-1913)." [1]
Priestley was unimpressed at the difference "between the way the work was carried out and the way when we were landing stores at Cape Royds.... [There are] too many officers superintending and the men never know when and where to go for orders.... [An] Expedition to make a complete success should be entirely away from any Navy ideas.... [In] this one particular give me Shackleton's expedition over and over again." [2]

Faced with the necessity of marking the route between ship and hut, empty paraffin tins were pressed into service.

"The Midnight Sun was visible for the first time today," wrote Amundsen. "It was a wonderful sight on this beautiful evening. It is almost calm; just a breath of wind from the S.E.... Who can describe the wonderful feeling of wellbeing that has enveloped us here in the calm waters among the ice, with plenty of fresh water -- or rather fresh ice -- and fine, fresh meat, after 4 months' unending, intolerable pitching and tossing? I believe that hardly anyone who has not experienced this, can properly understand to what degree we appreciate the change." [3]