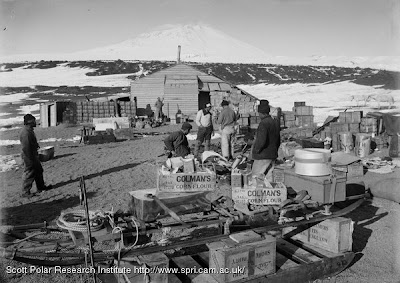 "Getting camp in order", photographed by Ponting, 23 January, 1911. [1]
Scott wrote out his orders for Campbell's Eastern Party: "Whilst I hope you may be able to land in King Edward's Land, I fully realise the possibility of the conditions being unfavourable and the difficulty of the task which has been set you.

"I do not think you should attempt a landing unless the Ship can remain in security near you for at least three days, unless all your stores can be placed in a position of safety in a shorter time.

"The Ship will give you all possible help in erecting your hut, &tc., but I hope you will not find it necessary to keep her by you for any length of time.

"Should you succeed in landing, the object you will hold in view is to discover the nature and extent of King Edward's Land. The possibilities of your situation are so various that it must be left to you entirely to determine how this object may be best achieved.

"In this connexion it remains only to say that you should be at your winter situation and ready to embark on February 1, 1912.

"Should you be unable to land in the region of King Edward's Land you will be at liberty to go to the region of Robertson Bay after communicating with Cape Evans." [2]

Five days after beginning the hut, Amundsen wrote, "The roof was on. All further work [of building] can thus take place inside and cannot be inhibited by the weather.... This afternoon, while they were working on the house, Bj. & Jørg. heard a violent noise in the ice, far away. Probably an iceberg calving, or formation of crevasses in the barrier." [3]