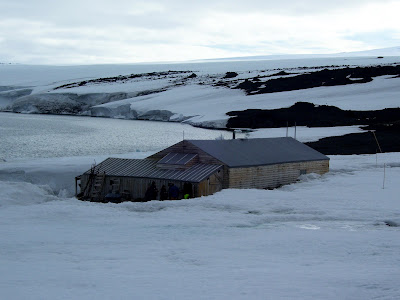 The hut at Cape Evans, photographed 28 January 2007 by Lin Padgham. Two annexes were built later, one not visible in this photo, as a stables for the ponies, and the second one, seen here, as a stores hut. The entrance to the hut proper is through the door at the far right of the stores annexe. [1]
The shore party moved into their new home.

"Such a noble dwelling transcends the word 'hut,'" wrote Scott, "and we pause to give it a more fitting title only from lack of the appropriate suggestion. What shall we call it?... The word 'hut' is misleading. Our residence is really a house of considerable size, in every respect the finest that has ever been erected in the Polar regions; 50 ft. long by 25 wide and 9 ft. to the eaves." [2]

"It would rejoice your heart," Wilson wrote to Kathleen Scott, "to see your husband in the weather beaten condition he is in at present. He is in the most excellent trim for hard work. I am sure he feels, as I do, that it was only yesterday we were here and that the seven years which have passed over have left no trace, except in your husband a very much more confident grasp of conditions & possibilities, in which he simply excels.... There is nothing I wouldn't do for him. He is just splendid." [3] 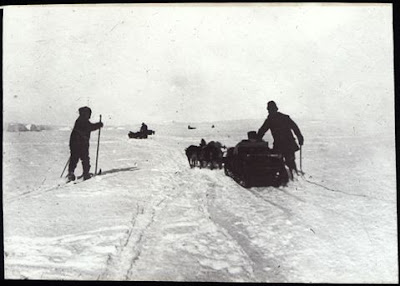 Dog teams with loaded sledges on the way to Framheim, January or February 1911. [4]
Work continued transporting equipment and supplies over the sea ice at the Bay of Whales. "The going has been good," Amundsen noted in his diary. "The sun has had a considerable effect on the [snow]. Wide, polished expanses help to keep the sledges moving." [5]