"Francis E C Davies constructing a one storied wooden hut at Antarctica during the British Antarctic ('Terra Nova') Expedition (1910-1913). Photograph taken on the 10th of January 1911, by Herbert George Ponting." [1]
Work continued on the hut. Its double-walls were lined with felt and insulated with quilted seaweed, and the roof was covered with "three-ply rubberoid". Inside, the floor was covered with linoleum, and a bulkhead was constructed of packing cases to separate the seamen's mess-deck and the ward-room for the use of the officers and scientists. 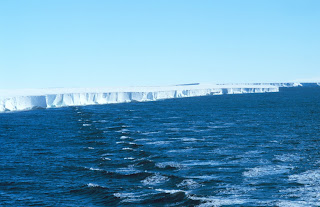 The Ross Ice Shelf, photographed in 1997 by the U.S. National Oceanic and Atmospheric Administration. [2]
The Fram came upon the Great Ice Barrier, the massive Ross Ice Shelf. Nilsen had brought them in at 169° 40' W longitude, only a little too far to the west. [3]

Bjaaland waxed poetic in his diary: "At long last, the ice barrier hove into sight today. It is a strange feeling that grips one as the sight now reveals itself. The sea is still as a pool, and before one stands this Great Wall of China and glitters. Far off, it is like a photograph that has just been developed on the plate." [4]

Amundsen, however, was more pragmatic. "There it lay," he wrote in his diary, "this infamous 200 ft. high snow wall -- wall of ice one cannot call it -- and gleamed at us. I had expected it to impress me more than it does, but the excellent reproductions in Shackleton's book meant that I had got used to it and looked on it as an old acquaintance. So here we are." [5]

He wrote later, "At 2.30 p.m. we came in sight of the Great Ice Barrier. Slowly it rose up out of the sea until we were face to face with it in all its imposing majesty. It is difficult with the help of the pen to give any idea of the impression this mighty wall of ice makes on the observer who is confronted with it for the first time. It is altogether a thing which can hardly be described; but one can understand very well that this wall of 100 feet [sic] in height was regarded for a generation as an insuperable obstacle to further southward progress.

"We knew that the theory of the Barrier’s impregnability had long ago been overthrown; there was an opening to the unknown realm beyond it. This opening -- the Bay of Whales -- ought to lie, according to the descriptions before us, about a hundred miles to the east of the position in which we were. Our course was altered to true east, and during a cruise of twenty-four hours along the Barrier we had every opportunity of marvelling at this gigantic work of Nature. It was not without a certain feeling of suspense that we looked forward to our arrival at the harbour we were seeking What state should we find it in? Would it prove impossible to land at all conveniently?" [6]

[1] Alexander Turnbull Library, National Library of New Zealand. The entrance annexe with skylight visible in this photograph would later be surrounded by a stores annexe.
[2] Wikimedia Commons.
[3] Roland Huntford notes in his first two books about the South Pole that upon crossing the international date line on the way south, which would have been around 10th January, 1911, Amundsen forgot to put back his dates by one. Upon arrival at the pole itself, Amundsen made sure to note this: "'So we arrived, and planted our flag at the geographical South Pole,' Amundsen wrote in his diary. 'Thanks be to God!' The entry was headed 'Friday 15 December (really 14th)''' (The Amundsen Photographs, p.130). "On returning to civilization," Huntford adds, "the dates were (pedantically) revised" (Scott and Amundsen, p.546). This is mentioned almost in passing in the last sentence of Appendix II of Amundsen's The South Pole, which reads only, "The date was not changed on crossing the 180th meridian." It is not at all clear from Huntford's notes whether or not he silently corrected the dates in the Norwegians' diaries to align with this revision, but many seem to have been. For the Fram's arrival at the Great Barrier, for example, Bjaaland's diary as quoted by Huntford in Scott and Amundsen is dated 11 January, which is the supposedly-revised date given by Amundsen in The South Pole (ch.4). The only time that the two expeditions came in contact was on 4th February 1912, when Campbell in the Terra Nova put in at the Bay of Whales to find the Fram already established there; the diaries quoted by Huntford are indeed dated 4 February.
Hassel's diary (published by Vågemot Miniforlag in 1997) notes that "Friday, January 26, 1912 at 3 1/2 in the morning we came back from the South Pole, which we reached 15 December (new date 14 December) at about 5 in the afternoon", but no further information or explanation is given by either Hassel or the unknown editor.
For the most part, dates given for the Norwegians here in "Scott vs. Amundsen" are one day earlier than those given in the published sources by the respective authors, unless otherwise noted. Thus, here, pedantically or not, the Pole is attained on 14 December 1911.
Amundsen's book might be taken as the standard, but Arthur Hinks points out in "The Observations of Amundsen and Scott at the South Pole" (The Geographical Journal, vol. 103, no. 4 (April 1944), pp. 160-180) that dates were corrected inconsistently even within the same edition of Amundsen's book. Comparison with archival materials such as Fram's logbook and the various diaries would most likely settle the question, but is unfortunately beyond the scope of this project. In Race for the South Pole (Continuum, 2010), Huntford adds in a footnote to the entry for 15th December 1911, "The 14 December 1911 is the date that has gone down in history. It is all academic anyway. In the interests of historical authenticity, the original 'wrong' dates in the Norwegian diaries are preserved" (p.320, fn 59). Since Huntford so clearly states that the dates in the Norwegian diaries have not been revised for that book, this is here taken as the standard, minus one: I am all for historical accuracy, but the point of this page being to see as exactly as possible where the respective expeditions were in relation to each other on any given date, here it does matter.
Note that the US paperback version of Scott and Amundsen, retitled The Last Place on Earth (New York : Atheneum, c1983) was "adapted" for the popular market by not only cutting much of the text but eliminating the footnotes altogether. There is no mention of the dates question at all, and the date given for arrival at the Pole is Friday, 15th December (p.453).
[4] Olav Bjaaland, diary, 11 January 1911, quoted by Roland Huntford in Scott and Amundsen (New York : Putnam, 1980, c1979), p.314.
[5] Roald Amundsen, [diary, 11 January 1911?], quoted by Roland Huntford in Scott and Amundsen (New York : Putnam, 1980, c1979), p.314.
[6] Roald Amundsen, The South Pole, ch.4.