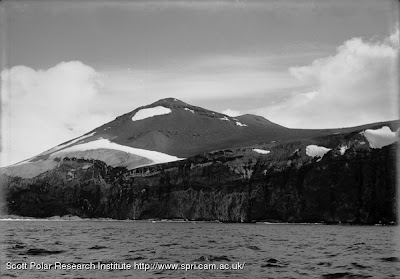 Cape Crozier precipices, photographed by Ponting on 3 January, 1911. [1]
"6 P.M. -- No good!! Alas! Cape Crozier with all its attractions is denied us," lamented Scott. [2] They had come to the Great Barrier five miles east of the Cape, but heavy swells prevented their landing a boat, and there was no access to the beach for unloading their equipment. "It would have taken weeks to land the ordinary stores, and heaven knows how we could have got the ponies and the motor sledges ashore." [3]

Cherry wrote later, "We could see the great pressure waves which had proved such an obstacle to travellers from the Discovery to the Emperor penguin rookery. The Knoll was clear, but the summit of Mount Terror was in the clouds. As for the Barrier we seemed to have known it all our lives, it was so exactly like what we had imagined it to be, and seen in the pictures and photographs." [4] 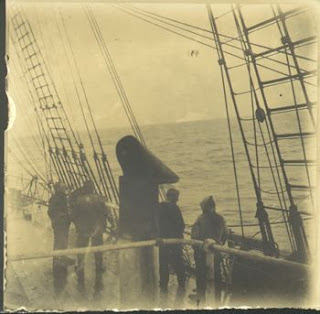 "The ice through which we have gone lies in streams with broad, open leads in between [with] a few eroded icebergs," Amundsen wrote in his diary. "An occasional seal has been seen here and there. In those cases, we stop and take it.... It had been a red letter day for all of us. For dinner we had steak -- the finest and tenderest meat.... The dogs have done just as well. For dinner they had each their huge piece of meat, about 2 kilos, together with a large piece of skin with blubber. To begin with, they did not really grasp the change from stockfish to fresh seal meat -- but it did not take them long.... I estimate that the ... heaviest seal we caught weighs about 500 kilos. Not many of those fellows will be needed to feed the dogs during the winter." [6]