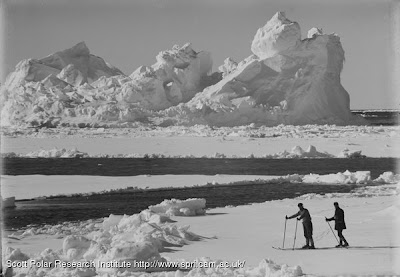 A berg in the pack, with Debenham and Taylor on skis, photographed by Ponting, 20 December, 1910. [1]
The Terra Nova's progress through the ice was frustratingly slow but at the least it gave them a chance to leave the ship for a little while, and they took the opportunity to try out their skis -- or, as Griffith Taylor noted, "in current parlance (à la Gran) to go 'mit dee shee op'". [2] It was for many of them the very first time they had used skis.

"Gran is wonderfully good and gives instruction well," wrote Scott [3], although the men were not always particularly enthusiastic -- P.O. Evans, for one, referred to them as "planks". [4]

"It was hot and garments came off one by one -- the Soldier [Oates] and Atkinson were stripped to the waist eventually, and have been sliding round the floe for some time in that condition. Nearly everyone has been wearing goggles; the glare is very bad. Ponting tried to get a colour picture, but unfortunately the ice colours are too delicate for this." 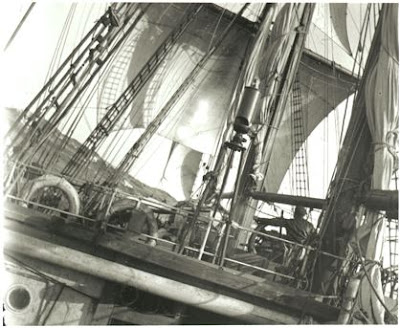 Fram in high seas, in an undated photograph. [5]
During a storm, the Fram tossed and rolled and bobbed, due to her round bottom and broad beam, built for the ice. The bridge, though, stayed dry, and sheltered the poor dogs, sometimes as many as fifty at a time. She might buck and toss, but the Fram never shipped a sea. It was, Amundsen wrote in his diary, "almost unbelievable. The one sea towers up more menacingly than the other, and one might expect it over one every moment. But no -- she gives a little twist, and the sea passes under .... Archer can be proud of Fram." [6]