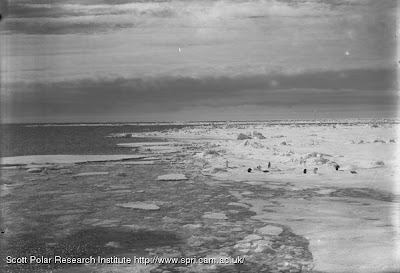 Penguins on the ice floe, photographed by Ponting, 24 December, 1910. [1]
Still caught in the pack, Scott wrote in his diary on Christmas Day, "We are captured. We do practically nothing under sail to push through, and could do little under steam, and at each step forward the possibility of advance seems to lessen." [2]

"Three weeks in the pack worried him a lot," Bruce later wrote to his sister. "He talked very little to anybody (and sometimes several days passed without my saying more than a few words to him), but I think that Wilson and Evans probably saw a little more of him.... I can imagine what an awful strain the whole responsibility of a show like this must be, & I thank heaven that I'm here as a volunteer with none of it. I always hated responsibility. My position [i.e. being Scott's brother-in-law], as we expected, was a trifle difficult but I effaced myself utterly, just kept my watch and did as I was told." [3]

"Captain Scott who has to face all the anxiety of things is splendid,” wrote Bowers the same day, “he never shows it & is geniality itself always. You could not imagine a more congenial leader or one who inspires more confidence." [4]

Spirits, however, were generally good, and the officers kept up their wardroom highjinks in celebration of the day. "We actually got Oates to sing for the first time," noted an astonished Day after Oates, having previously scorned "the infernal pianola", had given them "The Fly on the Turnip". [5]