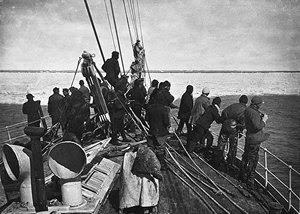 The Terra Nova entering the ice pack. [1]
"To-night we are in very close pack," Scott wrote, "it is doubtful if it is worth pushing on.... We had been very carefully into all the evidence of former voyages to pick the best meridian to go south on, and I thought and still think that the evidence points to the 178 W. as the best. We entered the pack more or less on this meridian, and have been rewarded by encountering worse conditions than any ship has had before. Worse, in fact, than I imagined would have been possible on any other meridian...." [2]