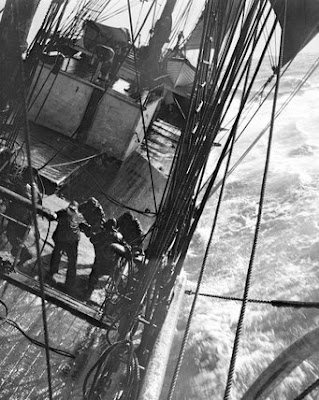 The Terra Nova in heavy seas, date unknown. Photograph by Herbert Ponting.
Forty-eight hours out of Port Chalmers, the seas had begun to rise, and as the ship was tossed and waves crashed over the rails, the stores so carefully stowed and lashed worked themselves loose to swing against the packing cases with deadly force. As the seas rose even further, the water that swept across the decks washed the dogs back and forth, leaving them hanging from their chains. Oates struggled with the ponies to keep them on their feet. "I can't remember a worse time," Oates wrote home afterwards. "The motion up in the bows was very violent and unless one had been through it one could not believe any pony could keep its feet for five minutes. I was drenched all night, the water continually forcing the skylight up and pouring over the fo'castle in a regular torrent. During the night one pony was down as many as eight times and I was unfortunate to have two killed. One fell and broke its leg and the other got cast so badly that without proper tackle it could not be got up and I had no-one who could do anything to help me as everybody was busy with the ship." [1]

The pumps in the engine room choked up, and Lashly, up to his neck in water, could do nothing to stem the flow of rushing water. After consultation with Scott, Lt. Evans ordered a hole cut in the engine-room bulkhead, and a chain of men began to bail. "It was a sight that one could never forget," Evans wrote later, "everybody saturated, some waist-deep on the floor of the engine room, oil and coal dust mixing with the water and making everyone filthy, some men clinging to the iron ladder-way and passing full buckets long after their muscles had ceased to work naturally, their grit and spirit keeping them going." [2] Evans stayed there for fourteen hours, passing up buckets of sludge, until at last the hand-pumps began to gain on the water level.

"Captain Scott was simply splendid," Bowers wrote home afterwards, "he might have been at Cowes & to do him & Teddy Evans credit at our worst strait none of our landsmen who were working so hard knew how serious things were. Capt. S. said to me quietly -- I am afraid it's a bad business for us -- what do you think? I said we were by no means dead yet though at that moment Oates at peril of his life got aft to report another horse dead & more down & then an awful sea swept away our lee bulwarks clear between the fore & main rigging -- only our chain lashings saved the lee motor sledge. Then, as I was soon diving after petrol cases, Capt Scott calmly told me that 'they did not matter' -- This was our great project for getting to the Pole -- the much advertised Motors that 'did not matter." [3]

Scott was justifiably proud of the officers and men, who had worked so hard under such terible conditions. "We are not out of the wood yet," he wrote in his diary, "but hope dawns & indeed it should for me when I find myself so wonderfully served." [4]

The deck under the ponies' stalls was now leaking badly onto the hammocks of the men below, but with admirable British fortitude, no-one complained. "Indeed the discomfort throughout the mess deck has been extreme. Everything has been thrown about, water has found its way down .... There is no daylight, and the air can only come through the small forehatch.... The men have been wetted to the skin repeatedly on deck, and have no chance of drying their clothing. All things considered their cheerful fortitude is little short of wonder."

Two ponies and one dog had been lost, along with ten tons of coal, sixty-five gallons of petrol, and a case of biologists' spirit.