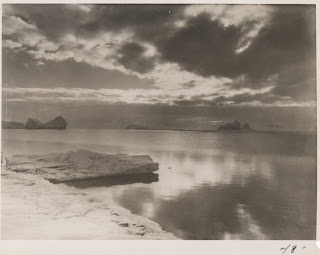 Icebergs photographed by Herbert Ponting, date not given. [1]
The Terra Nova entered the polar ice pack, at 65° 8'. Two bergs had been sighted on the port beam the day before, then in the morning a number of small, worn floes. The pack was further north than Scott had expected, he noted in his diary. "It's impossible to interpret the fact." [2]