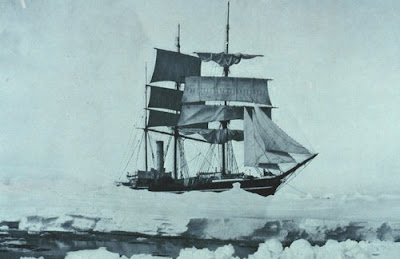 "In the pack -- a lead opening up": an illustration from Scott's Last Expedition. [1]
Wright was now pressed into service as ice expert, despite never having seen polar ice, let alone a berg; his experience surveying in Canada's Far North and a talent for improvisation would have to do.

"We have just made it through a piece of open water," he wrote in his diary, "and will soon strike more heavy pack -- in fact, have just struck a floe. It is wonderful how the old tub stands the butting into the floes. if anything, she leaks less than on leaving New Zealand. The heavy floes we break by climbing on top and crushing pieces off. The smaller by cracking across; most floes however we shove out of the way and that is why even in think pack to make any headway the pack must be reasonably open." [2]