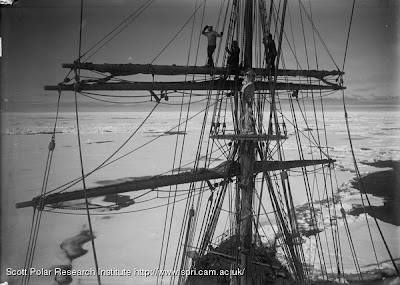 "In the ice-pack, from the Main-top of the Terra Nova. (Gran, Taylor and Wright). Dec. 22nd 1910", photographed by Ponting. [1]
The Terra Nova had been in the pack nearly three weeks, with little progress. "It is a very, very trying time," Scott wrote. "It's all very disheartening."

"One realises the awful monotony of a long stay in the pack such as Nansen and others experienced. One can imagine such days as these lengthening into interminable months and years." [2] 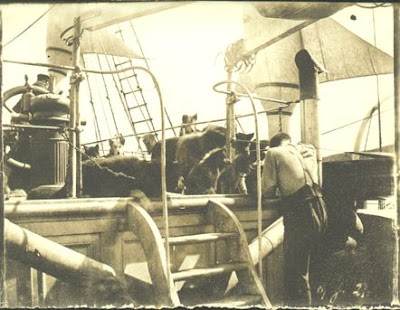 Dogs on the bridge of the Fram, 1910. [3]
The dogs, wrote Johansen, were "wonderful to study .... I have come to the conclusion that in dealing with sledge dogs, one will benefit most [if] one assumes that they are at least as intelligent as one's self. For it will pay off when driving and the life on the ice begins. If you have treated them without understanding and hit them at the wrong time, so that they do not understand the intention of the hiding, one can be certain that such a dog will make life difficult in the team when he sees the chance.... [Dogs] have a remarkable sense of justice and if they are well treated, will stick by their masters in life and death." [4]