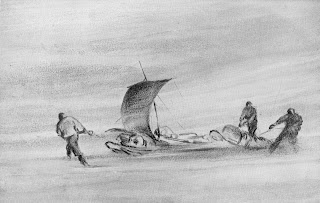 "Sledging in a High Wind -- E. A. Wilson, del." [1]
The uncertainty of not knowing the precise location of the next cairns was taking its toll. "There is little doubt we are in for a rotten critical time going home," wrote Scott, "and the lateness of the season may make it really serious. Shortly after starting to-day the wind grew very fresh from the S.E. with strong surface drift. We lost the faint track immediately, though covering ground fairly rapidly. Lunch came without sight of the cairn we had hoped to pass. In the afternoon, Bowers being sure we were too far to the west, steered out. Result, we have passed another pony camp without seeing it.... It's a gloomy position, more especially as one sees the same difficulty returning even when we have corrected the error." [2]

Lashly and Lt. Evans arrived at Hut Point at one in the afternoon. "Mr. Evans is alright and asleep," Lashly wrote. "We are looking for a mail now. How funny we should always be looking for something else, now we are safe." [3] Crean and Dimitri were off again almost at once to get to the ship.