"Everything depends on the coming journey, of course," Scott wrote to Admiral Egerton the evening before they were due to start. "I don't know if we shall get through. You know the chances of this sort of game." [1] 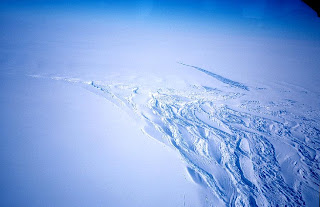 The intensely-crevassed region of the Ross Ice Shelf now called "Steershead", because of its shape from the air. Photo taken 2000-2001. [2]
Despite a thick fog, the Norwegians set out from the depot at 81°, with a visibility of four sledge lengths.

They soon lost their way and came upon a part of the Barrier filled with crevasses, formed due to the flow of the ice off of Marie Byrd Land to the east. Since the crevasses were, though numerous, only about a metre across, Amundsen decided to go on. After about twelve miles, Helmer Hanssen, now usually the leader, got his ski tips caught in the dog traces and fell into a crevasse. The dogs, having gotten across, promptly began to fight amongst themselves, the sledge skewed around nearly edgewise along the crevasse. Wisting rescued Hanssen while Amundsen skiied over the crevasse and stopped the dog-fight; the three then pulled the sledge to safety.

Hassel also fell into a crevasse.

"These crevasses are impressive when one lies at the edge and stares down in them. A bottomless chasm goes from light blue into the thickest darkness. The ugliest formations we have found here, are huge holes that could swallow Fram and a lot more besides. These holes are covered by a thin wind crust, and the little hole that is visible doesn't seem so menacing. But if one gets on to such a delightful spot, one is irrevocably lost. We passed one of these holes in the 'pea souper' today. Luckily H[elmer] H[anssen] saw it in time. There is not much that escapes his sharp eye. We are all clear. What risk do we not run in our march over such unpleasant places. We go with our lives in our hands each day. But it is pleasant to hear -- nobody wants to turn back. No -- these boys want to press on, cost what it will." [3]