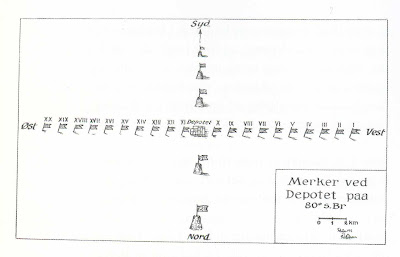 An illustration by Lt. Nilsen of the transverse marking system used to mark the depots. [1]
The party rested at the 81° depot.

"Bj[aaland] and I went out to look at our transverse marks. These marks were narrow planks from boxes about 2 1/2 [feet] long and were placed out at the beginning of March 1911. There they stood now, at the end of October, about 1/2 ft. lower -- presumably caused by drift snow. They were so clear and visible that we could not have passed them without seeing them." [2]

This route-marking system was set up in order for them to be able to find the depots in any weather. Without landmarks, there was always the possibility of being unsure of their location; Shackleton and Scott had both written of nearly missing depots in bad weather. On either side of each of their depots, the Norwegians had thus placed ten flags at one-mile intervals, each flag marked with a number in sequence. Upon coming to any of the flags, they would know at which point in the sequence they were. There were also numbered snow cairns seven miles apart on either side of the depot along the line of march.