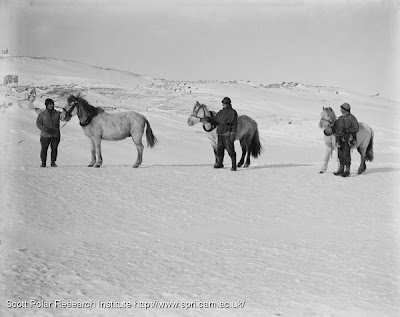 Bowers, Wilson, and Cherry with their ponies, 6 October 1911, photographed by Ponting. [1]
The main party set off from Cape Evans. "They had packed the sledges overnight," Taylor recalled, "and they took 20 lbs. personal baggage. The Owner had asked me what book he should take. He wanted something fairly filling. I recommended Tyndall's Glaciers -- if he wouldn't find it 'coolish.' He didn't fancy this! So then I said, 'Why not take Browning, as I'm doing?' And I believe that he did so.

"Wright's pony was the first harnessed to its sledge. Chinaman is Jehu's rival for last place, and as some compensation is easy to harness. Seaman Evans led Snatcher, who used to rush ahead and take the lead as soon as he was harnessed. Cherry had Michael, a steady goer, and Wilson led Nobby -- the pony rescued from the killer whales in March.... Christopher, as usual, behaved like a demon. First they had to trice his front leg up tight under his shoulder, then it took five minutes to throw him. The sledge was brought up and he was harnessed in while his head was held down on the floe. Finally he rose up, still on three legs, and started off galloping as well as he was able. After several violent kicks his foreleg was released, and after more watch-spring flicks with his hind legs he set off fairly steadily. Titus can't stop him when once he has started, and will have to do the fifteen miles in one lap probably!

"Dear old Titus -- that was my last memory of him. Imperturbable as ever; never hasty, never angry, but soothing that vicious animal, and determined to get the best out of most unpromising material in his endeavour to do his simple duty.

"Bowers was last to leave. His pony, Victor, nervous but not vicious, was soon in the traces. I ran to the end of the Cape and watched the little cavalcade -- already strung out into remote units -- rapidly fade into the lonely white waste to southward." [1]

Scott, Gran noted, "rather more than a little nervous" [2], hitched his pony to the wrong sledge and had to transfer before departing.

A few hours later, Scott rang from Hut Point, saying that he had forgotten the flag given to him by Queen Alexandra for the Pole, and wanted it sent on. Gran was ordered to do so, and set off the next day in a strong headwind, skiing the fifteen miles to Hut Point in three hours, and catching the Polar party just before they left. "The irony of fate," Scott said to Gran, that a Norwegian had carried the Union Jack the first few miles towards the Pole. [3]

After a day of thick fog and narrow but treacherous crevasses, the going smoothed out. "We seemed to be rushing along at 9 or 10 miles an hour, just like a rabbit chased by a bear," wrote Bjaaland. [4]

They stopped every five nautical miles to build a marker cairn.