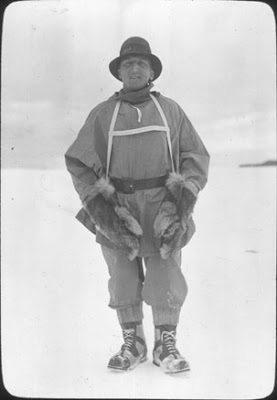 Bowers wearing the standard polar gear, Burberry wind-proof outer garments over woollen underclothes, and reindeer-fur mitts. [1]
"Last night Bowers lectured on Polar clothing. He had worked the subject up from our Polar library with critical and humorous ability, and since his recent journey he must be considered as entitled to an authoritative opinion of his own. The points in our clothing problems are too technical and too frequently discussed to need special notice at present, but as a result of a new study of Arctic precedents it is satisfactory to find it becomes more and more evident that our equipment is the best that has been devised for the purpose, always excepting the possible alternative of skins for spring journeys, an alternative we have no power to adopt. In spite of this we are making minor improvements all the time." [2]

This was Bowers' first experience with polar clothing.

A blizzard, with visibility nil, and temperature of -46 C delayed the start yet again. "[How lucky]," Johansen wrote, "that we are now indoors and not lying some miles in over the barrier, unable to move, and perhaps lost here at the beginning in the [crevassed] terrain to 80 degrees, which must be considered the worst to begin with." [3]

"Even the Chief, who claimed to have been ready to start the whole of last month, and is very anxious that the British will get to the pole before us, and therefore insisted on starting as soon as possible, has been making alterations to his anorak and fur clothing both Sunday and today. But are we ready to go. Whether it will be tomorrow is of course uncertain." [4]