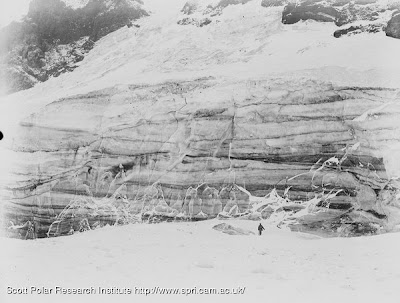 Warning Glacier, photographed by Levick, with Priestley in front for scale. [1]
Campbell, Priestley, Abbott, and Dickason set off on the first of their spring sledging journeys; Levick and Browning went with them as far as Warning Glacier, on the west of the Cape Adare peninsula, to photograph the glacier and surrounding mountains, before returning to the hut at Cape Adare.

One of Prestrud's bitches was on heat, which set all of the dogs on edge and made them nearly impossible to control -- she was "shot for loose living," Bjaaland noted. [2] They travelled about 13.5 nautical miles, following the flags laid out previously.