"Our marches are uniformly horrid just at present," wrote Scott. "The surface remains wretched, not quite so heavy as yesterday, perhaps, but very near it at times. Five miles out the advance party came straight and true on our last year's Bluff depot [at about 79°] marked with a flagstaff. Here following I found a note from Evans, cheerful in tone, dated 7 A.M. 7th inst. He is, therefore, the best part of five days ahead of us, which is good. Atkinson camped a mile beyond this cairn and had a very gloomy account of Chinaman. Said he couldn't last more than a mile or two." [1]

The temperature hovered around -10° F during the day. 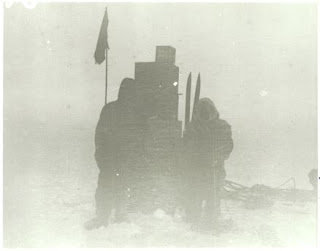 Two men in front of a depot, November 13, 1911. [2]
"Glittering white, shining blue, raven black lit by the sun, the land looks like a fairytale," wrote Amundsen. "Pinnacle after pinnacle, peak after peak -- crevassed, wild as any land on our globe, it lies, unseen and untrodden. It is a wonderful feeling to travel along it." [3]

They made the "great discovery" of a huge bight running due south, directly in their course. "The S'most and E'most point of C range, which I assumed must lie around 86°, and where our climb must take place, suddenly turned out to be the w'most cape" of this bight. Their journey therefore would be as much as 120 miles less in the high altitudes of the Plateau. "We cannot see land between these two capes, and therefore I assume that we cannot come up against it before 87°. According to the new compass error we have established today, our course runs straight between the capes. We are naturally very excited."

After a day's run of 20.7 miles, they reached 84°. They put out a depot in the afternoon, containing 24 kg of dog pemmican and 6kg for the men, 2 kg of chocolate, four bags of dried milk, 800 biscuits, a can of paraffin, a box of matches, and a few items of equipment.

Prestrud's instructions for his Eastern Party had been to proceed in a north-easterly course from the depot, but as he suspected that land was to be found directly east, and since the dogs were running well, he changed direction. They broke camp in a thick fog. "At 11 a.m.," he wrote later, "we passed the easternmost flag, at five geographical miles from the depot, and then we found ourselves on untrodden ground." [4]

"Stubberud, who for the first day or two after leaving the depot had been constantly stretching himself on tiptoe and looking out for mountain-tops, finally gave it as his heartfelt conviction that this King Edward Land we were hunting for was only a confounded 'Flyaway Land,' which had nothing to do with reality. We others were not yet quite prepared to share this view; for my own part, in any case, I was loath to give up the theory that assumed a southward continuation of King Edward Land along the 158th meridian; this theory had acquired a certain force during the winter, and was mainly supported by the fact that on the second depot journey we had seen, between the 81st and 82nd parallels, some big pressure-ridges, which suggested the presence of bare land in a south-easterly direction."