In the long, quiet winter days at Cape Evans, Scott reflected upon the men around him. 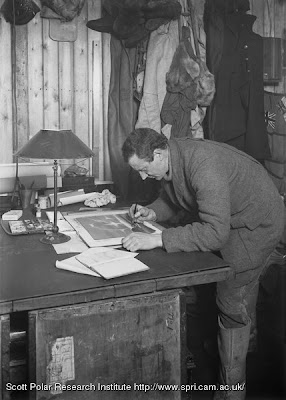 "Bill" Wilson working up a sketch, 18 May, 1911, photographed by Ponting. [1]
"One sees Wilson busy with pencil and colour box, rapidly and steadily adding to his portfolio of charming sketches and at intervals filling the gaps in his zoological work of Discovery times; withal ready and willing to give advice and assistance to others at all times; his sound judgment appreciated and therefore a constant referee." [2] 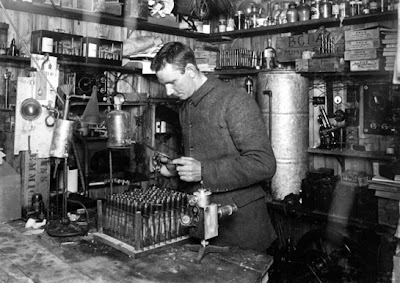 Simpson in his lab, photographed by Ponting, 21 December, 1911. [3]
"Simpson, master of his craft, untiringly attentive to the working of his numerous self-recording instruments, observing all changes with scientific acumen, doing the work of two observers at least and yet ever seeking to correlate an expanded scope. So the current meteorological and magnetic observations are taken as never before by Polar expeditions.

"Wright, good-hearted, strong, keen, striving to saturate his mind with the ice problems of this wonderful region. He has taken the electrical work in hand with all its modern interest of association with radio-activity.

"Evans, with a clear-minded zeal in his own work, does it with all the success of result which comes from the taking of pains. Therefrom we derive a singularly exact preservation of time -- an important consideration to all, but especially necessary for the physical work. Therefrom also, and including more labour, we have an accurate survey of our immediate surroundings and can trust to possess the correctly mapped results of all surveying data obtained. He has Gran for assistant. [4]

"Taylor's intellect is omnivorous and versatile -- his mind is unceasingly active, his grasp wide. Whatever he writes will be of interest -- his pen flows well." 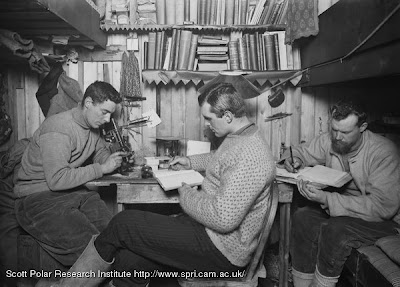 Debenham, Gran, and Taylor in their cubicle, photographed by Ponting, 18 May, 1911. [5]
"Debenham's is clearer. Here we have a well-trained, sturdy worker, with a quiet meaning that carries conviction; he realises the conceptions of thoroughness and conscientiousness." 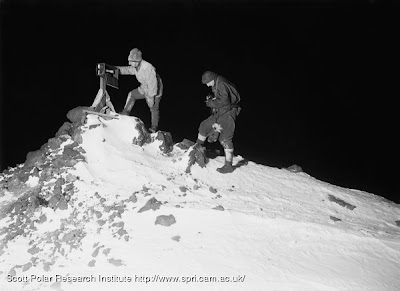 Bowers reading the thermometer at the top of the Ramp, with Wilson taking notes, photographed by flash-light by Ponting, 7 June, 1911. [6]
"To Bowers' practical genius is owed much of the smooth working of our station. He has a natural method in line with which all arrangements fall, so that expenditure is easily and exactly adjusted to supply, and I have the inestimable advantage of knowing the length of time which each of our possessions will last us and the assurance that there can be no waste. Active mind and active body were never more happily blended. It is a restless activity, admitting no idle moments and ever budding into new forms.

"So we see the balloons ascending under his guidance and anon he is away over the floe tracking the silk thread which held it. Such a task completed, he is away to exercise his pony, and later out again with the dogs, the last typically self-suggested, because for the moment there is no one else to care for these animals. Now in a similar manner he is spreading thermometer screens to get comparative readings with the home station. He is for the open air, seemingly incapable of realising any discomfort from it, and yet his hours within doors spent with equal profit. For he is intent on tracking the problems of sledging food and clothing to their innermost bearings and is becoming an authority on past records. This will be no small help to me and one which others never could have given." 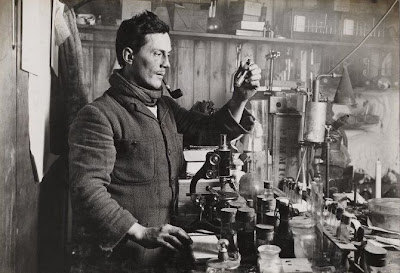 Atkinson in his lab, photographed by Ponting. [7]
"Adjacent to the physicist's corner of the hut Atkinson is quietly pursuing the subject of parasites. Already he is in a new world. The laying out of the fish trap was his action and the catches are his field of labour. Constantly he comes to ask if I would like to see some new form and I am taken to see some protozoa or ascidian isolated on the slide plate of his microscope. The fishes themselves are comparatively new to science; it is strange that their parasites should have been under investigation so soon.

"Atkinson's bench with its array of microscopes, test-tubes, spirit lamps, &c., is next the dark room in which Ponting spends the greater part of his life. I would describe him as sustained by artistic enthusiasm. This world of ours is a different one to him than it is to the rest of us -- he gauges it by its picturesqueness -- his joy is to reproduce its pictures artistically, his grief to fail to do so. No attitude could be happier for the work which he has undertaken, and one cannot doubt its productiveness. I would not imply that he is out of sympathy with the works of others, which is far from being the case, but that his energies centre devotedly on the minutiae of his business." 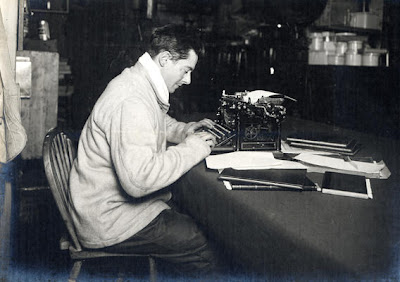 Cherry typing up the "South Polar Times", photographed by Ponting. [8]
"Cherry-Garrard is another of the open-air, self-effacing, quiet workers; his whole heart is in the life, with profound eagerness to help everyone. 'One has caught glimpses of him in tight places; sound all through and pretty hard also.' Indoors he is editing our Polar journal, out of doors he is busy making trial stone huts and blubber stoves, primarily with a view to the winter journey to Cape Crozier, but incidentally these are instructive experiments for any party which may get into difficulty by being cut off from the home station. It is very well to know how best to use the scant resources that nature provides in these regions. In this connection I have been studying our Arctic library to get details concerning snow hut building and the implements used for it." 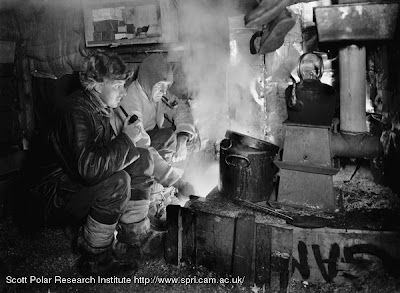 Meares and Oates at the blubber stove in the stables, cooking mash for the ponies, photographed by Ponting, possibly May 1911. [9]
"Oates' whole heart is in the ponies. He is really devoted to their care, and I believe will produce them in the best possible form for the sledging season. Opening out the stores, installing a blubber stove, &c., has kept him busy, whilst his satellite, Anton, is ever at work in the stables -- an excellent little man." 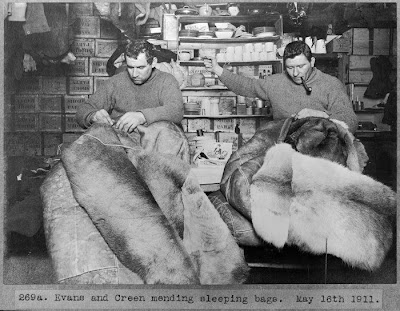 "Thomas Crean (on left) and Petty Officer Evans (on right) mending sleeping bags. Taken by Herbert George Ponting on 16 May 1911 during British Antarctic ('Terra Nova') Expedition (1910-1913)". [10]
"Evans and Crean are repairing sleeping-bags, covering felt boots, and generally working on sledging kit. In fact there is no one idle, and no one who has the least prospect of idleness."