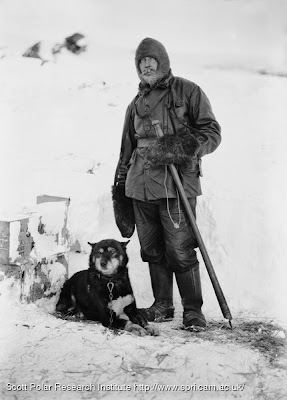 Meares and Osman before the start of the Southern Journey, photographed by Ponting, 28 August, 1911. [1]
Driving along in bad light, Wilson's team suddenly began to drop one after the other into a crevasse. Osman, the lead dog, dug in his feet and kept a foothold, struggling to bear the weight of those dogs now dangling from their harness into the abyss. Two of them slipped out of their harness to a ledge some sixty-five feet below, where, with amazing sang-froid, they curled up and went to sleep. Others, hanging in mid-air, fought with each other as they tried to get a purchase on either the wall of the crevasse or on each others' backs. Meares and Scott ran to help, after a few moments of uncertainty unloading Wilson's sledge to save the sleeping bags, tent, and cooker, then laying tent poles across the crevasse to take the weight off the now-choking Osman. They recovered eleven of the thirteen dogs, who, now running loose in their cut harnesses on the Barrier promptly began to fight with each other while Scott insisted on going down on a rope himself to rescue the two remaining dogs.

"Scott's interest in the incident," Cherry recalled, "apart from the recovery of the dogs, was scientific. Since we were running across the line of cleavage when the dogs went down, it was to be expected that we should be crossing the crevasses at right angles, and not be travelling, as actually happened, parallel to, or along them. While we were getting him up the sixty odd feet to which we had lowered him he kept muttering: 'I wonder why this is running the way it is -- you expect to find them at right angles,' and when down the crevasse he wanted to go off exploring, but we managed to persuade him that the snow-ledge upon which he was standing was utterly unsafe, and indeed we could see the nothingness below through the blue holes in the shelf. Another regret was that we had no thermometer: the temperature of the inside of the Barrier is of great interest and a fairly reliable record of the average temperature throughout the year might have been obtained when so far down into it. Altogether we could congratulate ourselves on a fortunate ending to a nasty business. We expected several more miles of crevasses, and the wind was getting up, driving the surface drift like smoke over the ground, with a very black sky to the south. We pitched the tent, had a good meal and mended the dog harness which had been ruthlessly cut in clearing the dogs. Luckily we found no more crevasses for it was now blowing hard, and rescue work would have been difficult, and we pushed on as far as possible that night, doing eleven miles after lunch, and sixteen for the day. It had been strenuous, for we had been working in or over the crevasse for 2 1/2 hours, and dogs and men were tired out. It cleared and became quite warm as we camped. There was a pleasant air of friendship in the tent that night, rather more than usual. That is generally the result of this kind of business." [2]

"All is well that ends well," Scott wrote in his diary, "and certainly this was a most surprisingly happy ending to a very serious episode. We felt we must have refreshment, so camped and had a meal, congratulating ourselves on a really miraculous escape. If the sledge had gone down Meares and I must have been badly injured, if not killed outright. The dogs are wonderful, but have had a terrible shaking -- three of them are passing blood and have more or less serious internal injuries. Many were held up by a thin thong round the stomach, writhing madly to get free. One dog better placed in its harness stretched its legs full before and behind and just managed to claw either side of the gap -- it had continued attempts to climb throughout, giving vent to terrified howls. Two of the animals hanging together had been fighting at intervals when they swung into any position which allowed them to bite one another. The crevasse for the time being was an inferno, and the time must have been all too terribly long for the wretched creatures. It was twenty minutes past three when we had completed the rescue work, and the accident must have happened before one-thirty. Some of the animals must have been dangling for over an hour. I had a good opportunity of examining the crack." [3]

With Prestrud again as forerunner, the Norwegians set out on their second depot-laying journey. Their goal was 83°, or 82° at the least. All of the men went this time, except Lindstrøm, who would stay behind to look after the hut and the dogs not going on this journey. They took seven sledges with six dogs each, each sledge loaded with about 300 kilos (661 lbs.).