By now, Scott, realising that they were not going to get as far south as he had hoped, had decided to send back the weakest ponies, in order to get as many of them back alive as possible. Oates wanted to press on with at least some of the ponies, then slaughter and depot them for dog food on the coming Polar journey, but Scott was against this idea. P.O. Evans, Keohane, and Forde were sent back with Blossom, Blucher, and Jimmy Pigg, the three weakest ponies.

"During the day," Gran wrote, "a new plan has been worked out. When our goal is reached, Scott, Wilson, Meares and Cherry will return with the dogs on foot, while Bowers, Oates and I will lead the horses back. That is the plan now." [1] 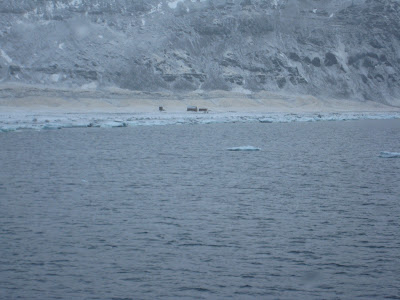 Huts at Cape Adare, photographed 21 February 2011 by Bruce McKinlay. The two structures on the right are those from Borchgrevink's Southern Cross Expedition of 1898-1900, and the one on the left was put up by the Northern Party in 1911. [2]
The Terra Nova with Campbell's Northern Party put in at Cape Adare, and began to unload their stores and prefabricated hut. Campbell was to survey the area and make magnetic observations. Levick was zoologist, photographer, stores officer, and doctor. Priestley was geologist, meteorologist, and microbiologist. Abbott was carpenter, Dickason the cook, and Browning assisted both Priestley with his meteorological work and Dickason in the galley. 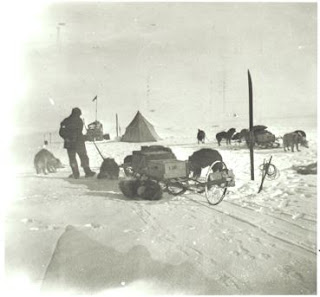 Tent camp with sledges, probably from the first depot-laying trip. The depot (marked with flags) stands near the tent. [2]
The Norwegians reached their goal of 80° S, built their depot, and turned for home. Amundsen was determined to not repeat the mistakes of Scott's and Shackleton's previous journeys, and on the way out had placed bamboo stakes with numbered black flags every eight miles to mark the route.

On the return journey, as these flags proved to be too far apart, they filled the gaps with frozen stockfish from the dogs' rations, stuck in the snow, alternating with boards from a broken-up packing case, every quarter-mile.

"It was much easier to travel down here than up North during the Gjøa expedition," Hanssen noted. [3]