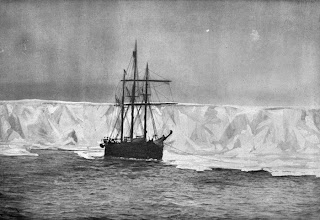 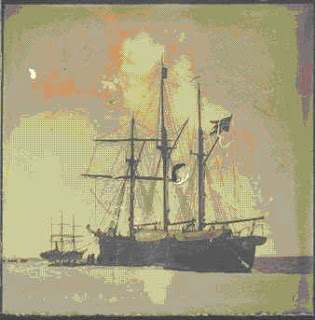 Scott had always doubted the existence of this Bay, and Priestley was cheered to find that they had now "wonderfully upheld" Shackleton's observations. [3]

"[It was] satisfactory to find ... everybody backing up the Shackleton expedition," Priestley went on, "and I turned in ... feeling quite cheerful and believing that there would be a good chance of ... finding a home on the Barrier here -- our last hope of surveying King Edward's Land. However, Man proposes but God disposes and I was waked at one o'clock by Lillie with the astounding news that we had sighted a ship at anchor to the sea ice in the Bay. All was confusion on board for a few minutes, everybody rushing up on deck with cameras and clothes. It was no false alarm, there she was within a few hundred yards of us and what is more, those of us who had read Nansen's books recognized the Fram."

"An eruption of Erebus would fall flat after that," Bruce remarked. [4] "Curses loud & deep were heard everywhere, and we ran close by her & made fast to the floe ahead without them knowing." [5]

This astonishment is not particularly surprising, for although the British knew that Amundsen was in the Antarctic, they had no idea where, indeed, had assumed either Graham Land or the Weddell Sea.

The Norwegians were perhaps rather more alarmed than astonished.

"We had long expected her [the Terra Nova]," Gjertsen wrote in his diary, "to come into the bay when she went Eastwards with the party [for] King Edward's Land. Our watchman ... saw two men go ashore, put on skis, and, with reasonably good speed for foreigners, rush off up towards the barrier, following the dogs' tracks. 'Well,' thought the watchman, 'if they have any nefarious intentions, (one of our constant subjects of discussion was how the Englishmen would take our challenge) the dogs will manage that job, and get them to turn round all right. It'll be worse if they sneak up to Fram, where I'm alone on watch. Best to be ready for all eventualities.' After this profound monologue, he dashed into the charthouse, carefully loaded 9 bullets into our old Farman gun (which when at peace we used for hunting seals), dug out an old English grammar, and looked up, on page 11, 'How are you this morning' and similar expressions. Thus armed to the teeth, both physically and mentally, he crept out on watch again. He might have been waiting 1/2 an hour, partly occupied in checking sight and trigger, partly swotting items of grammar, when suddenly a shock went through him. The Englishmen were coming down again, with a course straight for Fram.... He looked carefully: No, they had no weapons; if so, it must be a revolver in a pocket -- Suddenly he remembered a verse from his childhood, 'Be brave when danger threatens, etc.' and immediately became very brave. He put down the gun and the grammar just under his coat, so that both could be retrieved in a hurry, raised himself and calmly awaited the Englishmen's movements." [6] 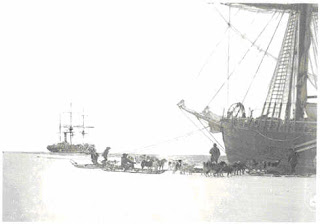 Terra Nova to the left, and Fram. [7]
At six in the morning, Gjertsen continued, Amundsen and the others "came galloping down. Never before had it gone so swimmingly, and once down on the flat ice, they formed a line and there was a veritable race to reach the ship. The Englishmen [were] absolutely flabbergasted. No, they had never dreamt that dogs could run in that way before a sledge, and already they felt contempt for their dear ponies. Suddenly they were gripped by wild excitement, cheered, and waved their caps. Our drivers returned their greetings and cracked their whips." [8] 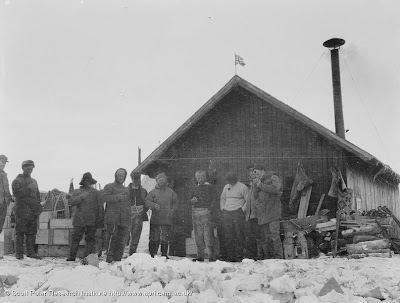 Campbell and his party at Framheim. At center, without a hat, is Amundsen, with Johansen at his right. Hassel is fourth from the left, with a fair beard. The man in the white jumper is probably Campbell. [9]
Campbell (who spoke Norwegian), Pennell, and Levick, the eastern party's surgeon, were invited to breakfast in the new hut, where Lindstrøm served them all hotcakes, and then they were given a tour of the Fram. "[Everyone] broke out in eulogies over how nice and comfortably we lived," Gjertsen said. "When they saw that every man had his own cabin, and everyone had a large common saloon, their eyes grew wide with astonishment. No, they had seen nothing like this before." Upon hearing how the officers' mess on the Terra Nova lay directly underneath the ponies, "one of Fram's crew was immediately seized by the deepest sympathy, and gave his melancholy informant ... a tot of aquavit to strengthen himself. The Englishman was wild with enthusiasm. Yes, it was 'a wonderful ship'."

Nilsen, after being shown over the Terra Nova in return, noted laconically, "I must confess it did not look very inviting." [10]

Johansen was not impressed either. "They should go to New Zealand immediately," he wrote in his diary. "They had a hard journey. Had been leaking and the bulwark was knocked in. But they were in good spirits and extremely courteous to us, though they nevertheless had not expected to meet us here. Something they repeatedly assured us." [11]

Amundsen told the British to land and make their base wherever they wanted, but, as Priestley put it, "we cannot according to etiquette trench on their country for winter quarters." [12] Campbell was deeply disappointed, having regarded the exploration of King Edward Land as "the thing of the whole expedition, " its only truly original work. [13] When Amundsen asked casually about the motor sledges, Campbell told him that one was "already on terra firma." He was referring, of course, to the one at the bottom of McMurdo Sound, but further information was neither asked for nor given. [14]

"It appears that ... Capt. Amundsen ... is going to have a run for the Pole so it will prove a very exciting affair," Dickason, one of the British seamen, wrote in his diary. "He has dogs for sledge work and all his men are good on ski." [15]