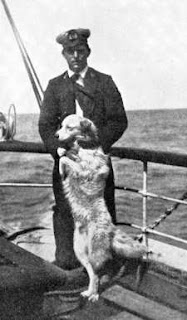 Gran on deck of the Terra Nova, 1910 [1]
On board the Terra Nova, Scott summoned Gran to his cabin. "When I entered," Gran wrote in his diary, "he handed over to me an opened cablegram, saying, 'What can you make of this?' I read with mounting astonishment: 'Beg leave to inform you Fram proceeding Antarctic. Amundsen.'" [2]

The cable was dated 3rd October, and had been sent from Christiania.

Scott apparently hoped that Gran, as a Norwegian, could shed some light on the matter, but Gran was as mystified as Scott, and suggested cabling Nansen for more information. "Hope Nansen answers quickly," Gran added to himself.

"I know that I have been reproached for not having at once made the extended plan public," Amundsen defended himself later, "so that not only my supporters, but the explorers who were preparing to visit the same regions might have knowledge of it. I was well aware that these reproaches would come, and had therefore carefully weighed this side of the matter. As regards the former -- the contributors to my expedition -- my mind was soon at rest. They were all men of position, and above discussing the application of the sums they had dedicated to the enterprise. I knew that I enjoyed such confidence among these people that they would all judge the circumstances aright, and know that when the time came their contributions would be used for the purpose for which they were given. And I have already received countless proofs that I was not mistaken.

"Nor did I feel any great scruples with regard to the other Antarctic expeditions that were being planned at the time. I knew I should be able to inform Captain Scott of the extension of my plans before he left civilization, and therefore a few months sooner or later could be of no great importance. Scott’s plan and equipment were so widely different from my own that I regarded the telegram that I sent him later, with the information that we were bound for the Antarctic regions, rather as a mark of courtesy than as a communication which might cause him to alter his programme in the slightest degree. The British expedition was designed entirely for scientific research. The Pole was only a side-issue, whereas in my extended plan it was the main object. On this little détour science would have to look after itself; but of course I knew very well that we could not reach the Pole by the route I had determined to take without enriching in a considerable degree several branches of science.

"Our preparations were entirely different, and I doubt whether Captain Scott, with his great knowledge of Antarctic exploration, would have departed in any point from the experience he had gained and altered his equipment in accordance with that which I found it best to employ. For I came far short of Scott both in experience and means." [3]

In his diary, he calmly noted, "[Work] on the dog harnesses was started. The yokes are to be covered with cloth, so that they will not wear out too quickly. Besides, we will sew a complete new set of traces." [4]

[1] "Tryggve Gran", Eldre Nygaardsgutters Forening, enf.no.
[2] Tryggve Gran, diary, 14 October, 1910, quoted by Roland Huntford in Scott and Amundsen (New York : Putnam, 1980, c1979), p.317. Cherry-Garrard gives the text as "Madeira. Am going South. Amundsen", an even more cryptic message that the one quoted by Gran; other sources give slightly different versions of either. There seems to be no published image of the actual cable.
[3] Roald Amundsen, The South Pole, ch.2.
[4] Roald Amundsen, diary, 13 October, 1911, quoted by Roland Huntford in The Amundsen Photographs (London : Hodder & Stoughton, c1987), p.65.