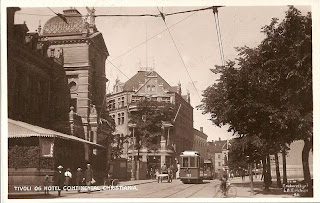 The Hotel Continental, Christiania. [1]
Almost the moment that he arrived back in Christiania, Leon Amundsen had an audience with the King to tell him about his brother's change of plan; at the same time, Helland-Hansen delivered a letter from Amundsen to Nansen.

Nansen is reported to have said, "The idiot! Why couldn't he have told me. He could have had all my plans and calculations." [2]

In the evening of 1st October, Leon held a press conference at the Hotel Continental. "The excitement was great," wrote the Bergen Anonce Tidende the next day. "We knew that it was an announcement concerning Fram which Herr Leon Amundsen was going to make; but of what it consisted, we had not the slightest inkling. And as we waited, the excitement mounted." [3]