The British aboard the Terra Nova, perhaps blissfully unaware of the storm breaking back in Europe, were busy settling into life aboard ship and sizing each other up, their high spirits dampened only slightly by Scott's presence. "The Owner," Wright noted, "has a thirst for scientific knowledge that cannot be quenched. He takes no part in the skylarking -- but always looks on with a grin." [1]

Oates -- who had almost instantly been nicknamed Titus after the near-legendary 17th-century conspirator -- wrote home, "The ship has only two speeds, one is slow and other is slower; however I can't abuse her as we had very strong weather last week and she behaved splendidly.... I do all kinds of jobs wire splicing, mending sails, stoking, trimming coal, painting etc: and one way and another I am picking up a lot of knowledge." [2]

"Roald Amundsen will be first to the South Pole". [3]
"FRAM FORGES TOWARDS THE SOUTH POLE," headlines in Christiania newspapers shouted. "SENSATIONAL ANNOUNCEMENT BY ROALD AMUNDSEN."

"From Madeira," ran Amundsen's letter to the public, "Fram sets her course South for the Antarctic Regions to take part in the fight for the South Pole. At first glance this will appear to many to be a change in the original plan for the third voyage of the Fram. This is, however, not the case. It is only an extension of the Expedition's plan, not an alteration." He was careful to make it clear that praise or blame would be his. "Alone I have taken this decision; alone I bear the responsibility." [4]

"With a single blow," Morgenbladet cheered, "Roald Amundsen ... reawakens the attention of the world when the exciting fight for the South Pole is on." [5] 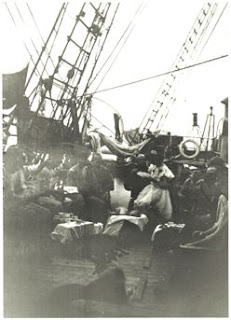 Gjertsen dressed as a ballet dancer for the festivities marking the crossing of the equator. [6]
Amundsen noted calmly in his diary, "The southerly breeze continues. Went about at midday, and are now sailing SE. Today we had our equator dinner, even though we were a few degrees north. We did not have the time to waste a weekday on that kind of nonsense. After a good dinner, coffee and liqueurs were served on deck, decorated for the occasion with flags. Gjertsen appeared as a dancer, performing admirably. Indeed, he looked so convincing in a little, short, flowered dress made of gauze -- and in dark, false curls -- that certain members of the expedition played along with the deception and made the obvious approaches. Thereafter, Nilsen played the part of a comedian. A better performance would be difficult to imagine. Both turns were warmly applauded." [7]