"Temp. -17°. Height 9700, must be high barometer," wrote Scott. "Started late, 8.50 -- for no reason, as I called the hands rather early. We must have fewer delays. There was a good stiff breeze and plenty of drift, but the tracks held. To our old blizzard camp of the 7th we got on well, 7 miles. But beyond the camp we found the tracks completely wiped out. We searched for some time, then marched on a short way and lunched, the weather gradually clearing, though the wind holding. Knowing there were two cairns at four mile intervals, we had little anxiety till we picked up the first far on our right, then steering right by a stroke of fortune, and Bowers' sharp eyes caught a glimpse of the second far on the left. Evidently we made a bad course outward at this part. There is not a sign of our tracks between these cairns, but the last, marking our night camp of the 6th, No. 59, is in the belt of hard sastrugi, and I was comforted to see signs of the track reappearing as we camped. I hope to goodness we can follow it to-morrow. We marched 16 miles (geo.) to-day, but made good only 15.4." [1]

Further north, Atkinson's party reached Hut Point, after a journey of 35 days. "Scott was to have sent back instructions for the dog party with us," Cherry wrote in his diary, "but these have, it would seem, been forgotten." [2] 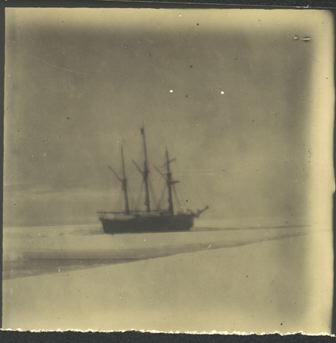 Fram at the ice-edge in the Bay of Whales, in an undated photograph. [3]
Having been earlier driven out to sea by wind and ice, the Fram had seen the signal of the polar party's arrival, a swallow-tailed naval ensign flying from Cape Man's Head, and had put in to the Bay of Whales, blasting her horn. "There was great enthusiasm," Nilsen said later. "The first man on board was the Chief; I was so certain he had reached the goal that I never asked him. Not till an hour later, when we had discussed all kinds of other things, did I enquire 'Well, of course you have been at the South Pole?'" [3]

Much of the news that Nilsen brought was of how Amundsen's "detour" was viewed in the press at home and in England. "A number of people seem to be indignant over our activities down here -- a breach of 'etiquette'?" Amundsen had fumed in his diary the night before. "Are these people mad? Is the question of the Pole exclusively confided to Scott for solution? I don't give a hang for these idiots. Nansen, as usual, with his cool, clear understanding, has cooled emotions. Oh well, people are idiotic." [4]

Nilsen also told of Fram's stay in Buenos Aires, and his visit with Amundsen's benefactor Don Pedro Christophersen, for whose help and support Amundsen was still deeply grateful. "It is to the intervention of this man," he wrote in his diary, "that the third Fram expedition owes its continued existence. At home, all doors were shut -- with the exception of the King and Fridtjof Nansen. May the confidence that they have shown me not be disappointed! I admire the King for his manly behaviour. Likewise the other two gentlemen. When everyone turned their backs on me, they came towards me. The King was not afraid to give a contribution to the South Polar expedition [sic], even if parliament -- or the majority -- wanted Fram to be ordered home. But -- it didn't go the way those gentlemen wanted. Just wait a bit, we'll soon have a talk. Perhaps you will be pleasanter the next time you hear from Fram." [5]

But he still had to get through before Scott with the news. "Time is precious, and we've got to reach civilization before anyone else."

He planned to start loading the ship almost immediately and sail on the 31st, heading to Hobart and thence to Buenos Aires, "where I have to obtain temporary assistance for the drift".