"Our luck in weather is preposterous," wrote Scott. "It was thick and snowy, yet we could have got on; but at breakfast the wind increased, and by 4.30 it was blowing a full gale from the south. The pony wall blew down, huge drifts collected, and the sledges were quickly buried. It was the strongest wind I have known here in summer." [1] By eleven it had begun to clear, and they had lunch and prepared to start.

"We were off at 2 P.M., the land showing all round, and, but for some cloud to the S.E., everything promising. At 2.15 I saw the south-easterly cloud spreading up; it blotted out the land 30 miles away at 2.30 and was on us before 3. The sun went out, snow fell thickly, and marching conditions became horrible. The wind increased from the S.E., changed to S.W., where it hung for a time, and suddenly shifted to W.N.W. and then N.N.W., from which direction it is now blowing with falling and drifting snow. The changes of conditions are inconceivably rapid, perfectly bewildering. In spite of all these difficulties we have managed to get 11 1/2 miles south and to this camp at 7 P.M. -- the conditions of marching simply horrible."

"The man-haulers," he added, "led out 6 miles (geo.) and then camped. I think they had had enough of leading. We passed them, Bowers and I ahead on ski." 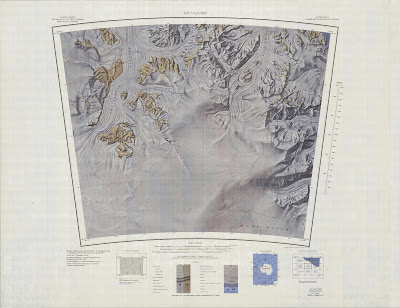 A 1965 map of part of the Queen Maud range and the edge of the Polar plateau, from aerial photographs taken 1960-1964 by the USGS. The top of the Axel Heiberg Glacier is near the centre at the right edge of the map; the Devil's Glacier and Ballroom are not marked. [2]
At the edge of the plateau, they came upon what they called "The Devil's Dance-Floor" (later called the Devil's Ballroom).

"First we had to cross ... mirror-smooth ice with filled crevasses here and there," wrote Amundsen in his diary. "This ... was not difficult to cross.... Naturally, there was no question of using ski. We all had to support the sledges and help the dogs. The next terrain offered good going, and we congratulated ourselves on having overcome all difficulties. But no! We were not going to get off so lightly. [We encountered] a violent disturbance [in the ice]. Suddenly one of the runners of Wisting's sledge broke through to a bottomless crevasse.... We were able to hoist it up again without damage.... We got through safe and sound and climbed up on a rise. This again consisted of bare ice, but then we discovered it to be filled with hidden crevasses, where we could not set our foot anywhere without breaking through." [3]

"Luckily most of the crevasses were filled, but some were dangerous enough. It was hard work for the dogs. Bjaaland fell through, but managed to hold on to his sledge, otherwise he would have been irrevocably lost.... We finally got over, and little by little [the terrain] changed to the real plateau, without any disturbance.... No more chasms or crevasses --"