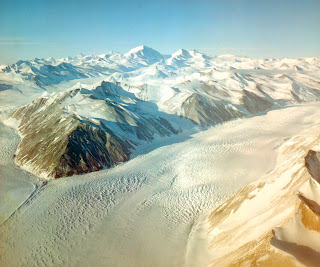 The Beardmore Glacier, discovered by Shackleton on his Nimrod expedition in 1908. This aerial photograph was taken in 1956. [1]
"[Lt. Evans's team] started quite well," wrote Scott, "but got into difficulties, did just the wrong thing by straining again and again, and so, tiring themselves, went from bad to worse. Their ski shoes, too, are out of trim. Just as I thought we were in for making a great score, this difficulty overtakes us -- it is dreadfully trying. The snow around us to-night is terribly soft, one sinks to the knee at every step; it would be impossible to drag sledges on foot and very difficult for dogs. Ski are the thing, and here are my tiresome fellow-countrymen too prejudiced to have prepared themselves for the event." [2]

Wright, with Atkinson and Lashly on Lt. Evans's team, wrote somewhat testily in his diary, "Scott came back to wonder why we were behind the other teams. I was in front with Evans and had found one could do better by pulling at an angle of about 15° to the side and thus get a grip on the surface without my ski sliding back. Scott then said to Birdie, 'See that's the way to do it,' to which Birdie unthinkingly replied, 'Yes, but look at the loss of pull due to the angle.' I felt like reminding Birdie that the cosine at 15° would not lose more than 1 per cent effort of the straight pull.... However I kept my peace, for conditions were then at their worst and any argument ... should be avoided." [3] 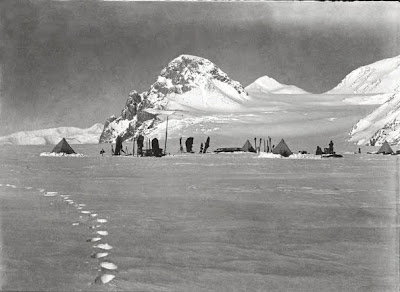 The camp at Lower Glacier Depot, 11th December, 1911, photographed by Scott. [4]
In the afternoon, Meares and Dimitri finally turned for home with the dog teams. "They have done splendidly," Cherry wrote in his diary. "It looks as if Amundsen may have hit off the right thing." [5]

"The dogs should get back quite easily," Scott added, "there is food all along the line." There were in fact only two depots between the foot of the Beardmore and 80° (to Amundsen's seven), the Mid-Barrier depot and One Ton, 120 miles apart.

The dogs were supposed to have turned back two days earlier. In order to provide Meares with two days' more food, everyone else in the party gave up one biscuit daily, almost five percent of an already-low ration. [6]

At 89° 15', they started now to go downhill, sinking gently from the summit.

"[The] same fine terrain and going," Amundsen wrote in his diary. [7] In sunshine and clear skies, the men had done seventeen miles instead of their stipulated fifteen.

"The Pole is in sight," Bjaaland wrote. "Hope and pray to my God that the weather may continue fine. I whipped the dogs on to keep level with Helmer Hanssen's." [8]

With the goal fast approaching, nerves were tight. Hassel found Amundsen "distant and cantankerous", writing in his diary, "One would think the man has a screw loose. He has many times in the last few days actually initiated quarrels, an extraordinary stand to take for a Governor and leader for whom peace and good camaraderie should be the main target." [9]

In King Edward VII Land, Prestrud's Eastern Party had their first day of real sunshine. "At our midday rest we found ourselves abreast of the bay, where, on the outward journey, we had laid down our depot of seals' flesh. I had intended to turn aside to the depot and replenish our supply of meat as a precaution, but Johansen suggested leaving out this detour and going straight on. We might thereby run the risk of having to go on short rations; but Johansen thought it a greater risk to cross the treacherous ground about the bay, and, after some deliberation, I saw he was right. It was better to go on while we were about it." [10]