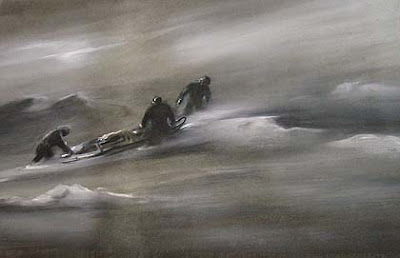 "Three Men with a Sledge in Snow", a sketch by Wilson.
The Cape Crozier party had begun relaying, taking one sledge at a time and going back for the other, making them travel three miles for every one of distance. On the 5th, they managed only one and a half miles in soft new snow and a strong breeze, and recorded a noon temperature of almost -77°. "The day lives in my memory," wrote Cherry, "as that on which I found out that records are not worth making." [1] Wilson apologised continually, saying that he had never dreamed it would be so bad.