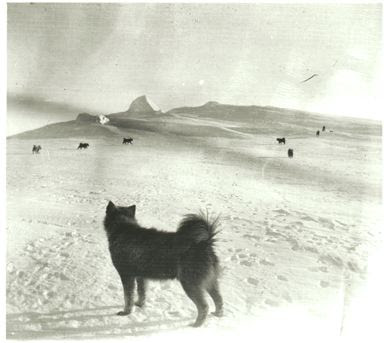 Dogs on the Barrier, undated. [1]
With the approaching spring and the easing-up of work, Amundsen had time to think, and he thought of the English. He dwelt at length in his diary on Shackleton. "Either the Englishmen [on Shackleton's expedition] must have had bad dogs or -- they didn't know how to use them." [2]

"Then comes S's reference [in The Heart of the Antarctic] to fur clothes. Furs are not necessary, he opines, [because they were not used] on Discovery or Nimrod. That is enough to prove that furs are unnecessary. Very possibly so. But [then why] does S. complain so often about the cold on his long Southern journey?... One thing I think I can ... say, if Shackleton had been equipped in a practical manner; dogs, fur clothes and, above all, skis ... and, naturally understood their use ... well then, the South Pole would have been a closed chapter. I admire in the highest degree what he and his companions achieved with the equipment they had. Bravery, determination, strength they did not lack. A little more experience -- preferably a journey in the far worse conditions in the Arctic ice -- would have crowned their work with success."

"The English have loudly and openly told the world that skis and dogs are unusable in these regions and that fur clothes are rubbish. We will see -- we will see. I don't want to boast -- it's not exactly in my line, but when people decide to attack the methods which have brought the Norwegians into the leader class as polar explorers -- skis and dogs, well, then, one must be allowed to be irritated and try to show the world that it is not only luck that brought us through with the help of such means, but calculation and understanding of how to use them."