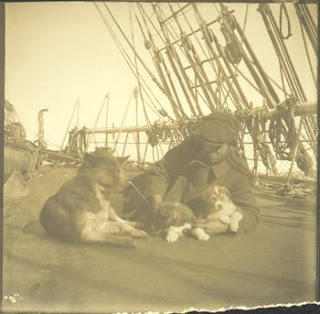 Stubberud with Kamilla and her pups on the deck of the Fram, 1910. [1]
The dogs were rapidly becoming a source of constant fascination for the men on the Fram. "The most attractive place," Amundsen wrote in his diary, "is the bridge. In a storm they pack themselves together [there] -- up to 50 at a time -- for mutual support. Nonetheless there are many battles after every big lurch.... Poor devils ... they take the shock as a personal affront." The Eskimo dog, he noted, was "extraordinarily intelligent. I have recently started chasing my dogs off the bridge at 6 a.m., in order to clean up.... At eight bells, I allow them back. Once was enough for them to associate these 8 strokes of the bell with permission to return. Next morning they rushed up as one man at 8 bells." [2]

By this time the dogs were "also allowed to use the chart-house. At night, up to 20 will pack themselves in. Inside, they are mostly peaceful. Last night, however, a battle took place because there were two rivals for the desk." [3]