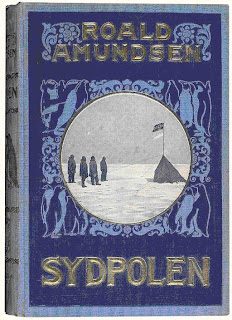 Norwegian public opinion of Amundsen's achievement was uneasy, despite the flags and headlines. "We are glad," wrote one newspaper, "that Roald Amundsen chose a new route to the South Pole, so that he avoided going directly in Scott's path. The English had the exclusive right to the route from McMurdo Sound. That was their opinion at any rate." [2] Helland-Hansen wrote to Nansen that he could not understand "why people don't show more pleasure than they do." [3]

The general mood in Britain seemed to be that Amundsen had made it all look too easy. Scott's report, sent back with the Terra Nova in April, gave, thought a Christiana newspaper, "the impression that terrain and weather were much worse [than] Amundsen's. This can hardly be the case. From Amundsen's acount, one can see, for example, that he was forced to lie still for four days in a snow storm. But he considers it as something that belongs to such a journey -- it's 'all in the day's work', and he doesn't make a fuss about it" [4] but the British seemed to see it as Scott's bad luck, rather than Amundsen's well-laid plans and matter-of-fact execution of them.

Nansen, who supported Amundsen completely, was so annoyed that he wrote in the introduction to Amundsen's book, published in the autumn of 1912, "Let no one come and prate about luck and chance. Amundsen’s luck is that of the strong man who looks ahead." [5]