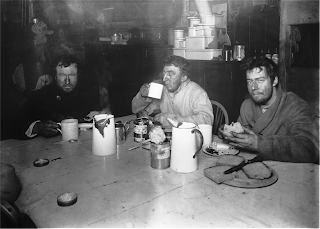 Wilson, Bowers, and Cherry on their return from Cape Crozier, 1 August 1911. [1]
Cherry had nothing but praise for his companions on the Winter Journey. "In civilization men are taken at their own valuation because there are so many ways of concealment, and there is so little time, perhaps even so little understanding. Not so down South. These two men went through the Winter Journey and lived: later they went through the Polar Journey and died. They were gold, pure, shining, unalloyed. Words cannot express how good their companionship was." [2]

The three men returned, Scott wrote, "after enduring for five weeks the hardest conditions on record. They looked more weather-worn than anyone I have yet seen. Their faces were scarred and wrinkled, their eyes dull, their hands whitened and creased with the constant exposure to damp and cold."

"That men should wander forth in the depth of a Polar night to face the most dismal cold and the fiercest gales in darkness is something new; that they should have persisted in this effort in spite of every adversity for five full weeks is heroic. It makes a tale for our generation which I hope may not be lost in the telling." 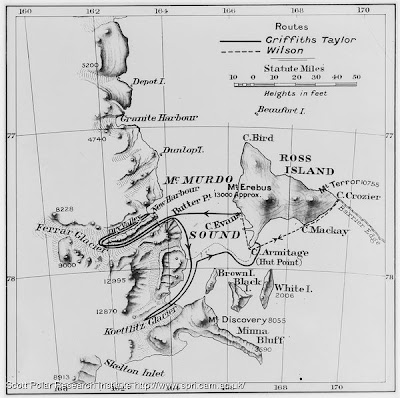 A map of Griffith Taylor's and Wilson's routes on their respective journeys. [3]
The trip had also been an opportunity to test different rations, with each man having a different combination of fats and carbohydrates. Scott summed this up the next day: "For our future sledge work several points have been most satisfactorily settled. The party went on a very simple food ration in different and extreme proportions; they took pemmican, butter, biscuit and tea only. After a short experience they found that Wilson, who had arranged for the greatest quantity of fat, had too much of it, and C.-G., who had gone for biscuit, had more than he could eat. A middle course was struck which gave a general proportion agreeable to all, and at the same time suited the total quantities of the various articles carried. In this way we have arrived at a simple and suitable ration for the inland plateau. The only change suggested is the addition of cocoa for the evening meal. The party contented themselves with hot water, deeming that tea might rob them of their slender chance of sleep."

"One continues to wonder as to the possibilities of fur clothing as made by the Esquimaux, with a sneaking feeling that it may outclass our more civilised garb. For us this can only be a matter of speculation, as it would have been quite impossible to have obtained such articles. With the exception of this radically different alternative, I feel sure we are as near perfection as experience can direct." [4]