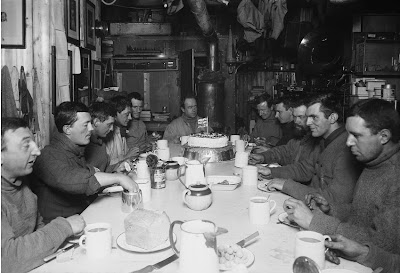 Scott's birthday lunch, 6th June. From left, Bowers, Atkinson, Wright, Nelson, Lt. Evans, Scott, Wilson, Simpson, Taylor, Gran, unknown (possibly Oates?).
"It is my birthday, a fact I might easily have forgotten, but my kind people did not," wrote Scott in his diary. "At lunch an immense birthday cake made its appearance and we were photographed assembled about it. Clissold had decorated its sugared top with various devices in chocolate and crystallised fruit, flags and photographs of myself." 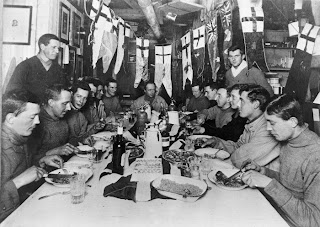 "Captain Robert Falcon Scott's last birthday dinner, 6th June, 1911, photographed by Herbert George Ponting during the British Antarctic ('Terra Nova') Expedition (1910-1913). From left to right: Atkinson, Meares, Cherry-Garrard, Taylor, Nelson, Evans, Scott (centre), Wilson, Simpson, Bowers, Wright, Debenham, and Day. Standing are Oates (left) and Gran." [1]
"After my walk I discovered that great preparations were in progress for a special dinner, and when the hour for that meal arrived we sat down to a sumptuous spread with our sledge banners hung about us. Clissold's especially excellent seal soup, roast mutton and red currant jelly, fruit salad, asparagus and chocolate -- such was our menu. For drink we had cider cup, a mystery not yet fathomed, some sherry and a liqueur.

"After this luxurious meal everyone was very festive and amiably argumentative. As I write there is a group in the dark room discussing political progress with discussions -- another at one corner of the dinner table airing its views on the origin of matter and the probability of its ultimate discovery, and yet another debating military problems. The scraps that reach me from the various groups sometimes piece together in ludicrous fashion. Perhaps these arguments are practically unprofitable, but they give a great deal of pleasure to the participants. It's delightful to hear the ring of triumph in some voice when the owner imagines he has delivered himself of a well-rounded period or a clinching statement concerning the point under discussion. They are boys, all of them, but such excellent good-natured ones; there has been no sign of sharpness or anger, no jarring note, in all these wordy contests! all end with a laugh." [2] 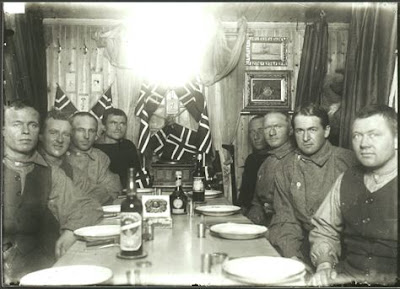 Bjaaland, Hassel, Wisting, Helmer Hanssen, Amundsen, Johansen, Prestrud, and Stubberud around the table at Framheim, in an undated but obviously celebratory photo. [3]
Johansen, on this Norwegian Independence Day, "proposed the Chief's skål, and said that working together was easy on the present expedition, because we had such a straightforward, understanding and pleasant chief." [4]