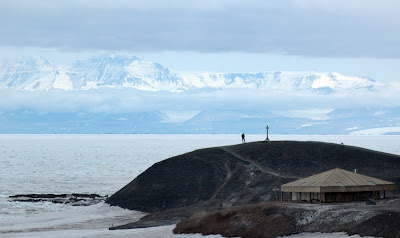 Hut Point in January 2007. The Royal Society Range can be seen in the background. The cross is a memorial to Seaman George Vince, who was killed falling from a cliff during Scott's Discovery Expedition, the first recorded death in McMurdo Sound. [1]
The depot party arrived at Hut Point early in the morning. "Found the hut in comparative order and slept there," Scott noted wearily in his diary. [2]

In the past few days, temperatures had dropped to 30-40 degrees C of frost. "16 1/2 miles covered today," Johansen recorded with disappointment, "the last part of the way terribly slowly. The poor dogs had to be whipped on." [3]